Changes in hunting regulations for GMUs 79 and 80

By: Lyndsie Ferrell - Updated: 5 months ago

SOUTH FORK— Hunting season is in full swing in the San Luis Valley and South Fork is the basecamp for some of the best hunting in the state. The town serves as a gateway to game management units 79 and 80, as well as, the once in a lifetime hunt game management unit (GMU) 76. The unit is one that can only be hunted after acquiring enough hunting points accumulated from unsuccessful annual applications for a specific species.

GMU units 79 and 80 now qualify for the Game Damage Program which has been altered by the Colorado Department of Wildlife (CPW) to allow Game Damage hunting to occur within these two hunting units. Landowners who have experienced (or there is potential for) damage to their harvested/growing crops, orchards, nursery, or livestock by the following big game species: elk, mule or whitetail deer, pronghorn antelope, black bear, mountain lion, bighorn sheep, or moose may qualify for Game Damage vouchers from the CPW.

Private landowners have been issued vouchers that they can allocate to licensed hunters at their discretion to allow hunting on their private land in order to help decrease the number of animals currently in that specific area which are causing crop or livestock depredation. Interested hunters must contact private landowners, gain permission and receive a voucher from the landowner before returning to the CDOW office in Monte Vista to have the voucher filled out and approved.

This program was put in place by CDOW in order to help ranchers, landowners and farmers in specific areas control the amount of damage that is occurring on their land caused by big game. According to the program’s description on the CDOW website, “Since the inception of the Game Damage Program in 1931, the original broad legal language has evolved to specify what game damage laws cover. Twenty years ago, the program was expanded to include damage prevention. The Game Damage Prevention Program has helped to decrease the amount of damage and the amount paid out in claims by the State.”

For more information on the Damaged Game Hunt Program, contact the CPW Monte Vista Office at 587-6900. 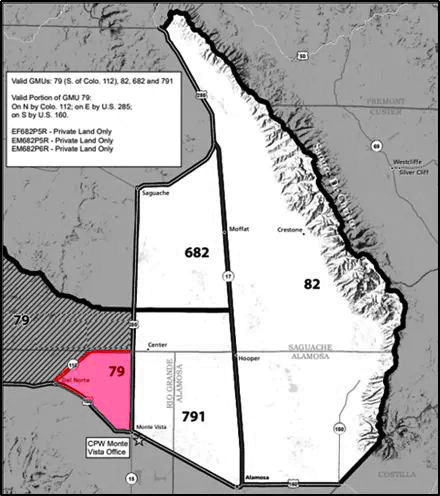 South Fork a land rich in history and cultures

Friends of Ski-Hi in urgent need of funds

We see you are enjoying our articles!

If you wish view the full all article, watch this short video or subscribe now for full access.

Subscribe Watch Video No, thanks! I will stick to the free stuff
Login